Dundas officially became a town on July 28th, 1847 with a population of approximately 1,925. Without a town hall, the first Town Council met at Bamberger’s Inn in April 1848, and after meeting next at the Swan Hotel, the council decided to build a town hall. The first four town councillors elected on March 23, 1848 were merchant and mill owner James Coleman in Ward 1, brewer and miller Robert Holt in Ward 2, school teacher Hugh McMahon in Ward 3, and auctioneer turned newspaper publisher Robert Spence in Ward 4. Shortly after they elected a fifth member to serve as President, John Paterson. In a minor scandal, President John Paterson borrowed the money required to build Town Hall from himself in his position as President of Desjardins Canal Co. Nonetheless, a mortgage of £2000 was taken out, and Town Hall was built out of Whirlpool sandstone by local James Scott. On June 16th, 1849 Town Council occupied council chambers for the first time. Town offices were on the first floor, the second floor had a gallery and a large room with a stage, which was used as a public meeting and show-type room, and the basement had butcher stalls, farmers stands, the jail and Alfred Bennett’s Saloon. Town Hall has undergone few renovations since its initial construction, with the notable exception of putting a cornerstone with date 1848 in 1943.  Today, Dundas Town Hall is one of the oldest existing municipal buildings in Ontario. 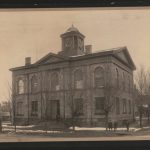