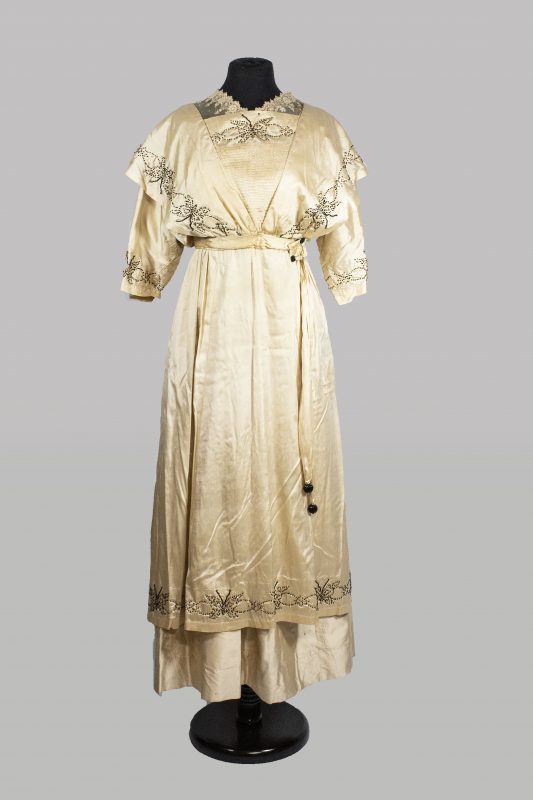 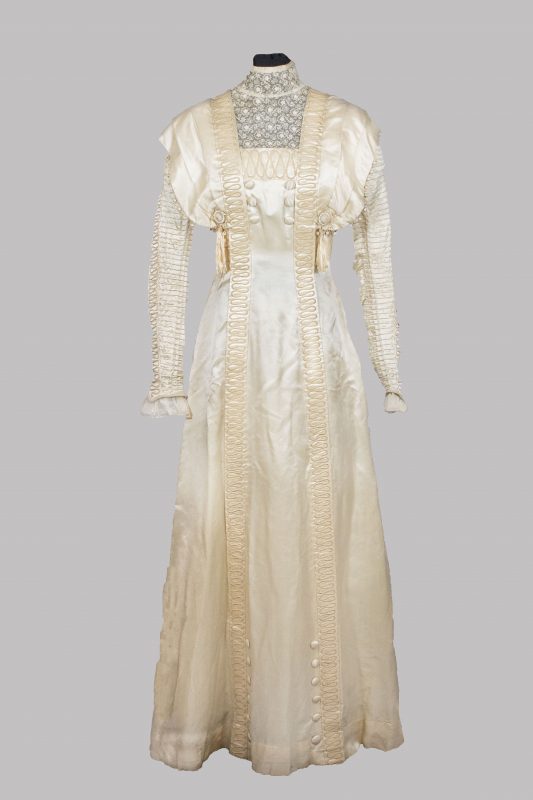 Fashion in the first decade of the 1900s wass marked by the loosening of rigid Victorian moralities evident in women’s dress; typically, with a deep “V” suggested in the fabric but remained covered. This is evidenced with the first dress. In one of the more dramatic efforts to shirk Victorian morality, the so-called “pneumonia neckline” featured an open V-neck without a modesty piece. Although this style did not last long and was highly criticized, there was a general increase in exposed skin over time. Throats became barer and forearms became increasingly acceptable to display in public.

Another popular style in this decade was the Edwardian S-Bend silhouette (named for the corset that slimmed women), giving the illusion of an impossibly small waist. The chest was often puffed out in a “pouter-pigeon” style where the dress fabric bulged out just above the waist. Although seemingly loose and comfortable, underneath the dress women would be cinched in with boned corsets and corset covers; which were an essential part a fashionable woman’s attire to hide an unsightly ridge made by a corset. Often the interior of the dress would have some specific lining or boning for added structure.

Below the waist, the skirt of the dress tended to be cut straight and curved smoothly over the hips with added fabric over the lower back to make a pronounced derriere. Both skirts on these dresses are cut straight and fitted over the hips in this style. When worn all together, the S-bend Silhouette looks a bit as if the woman is constantly leaning at an awkward angle. The S-bend was so popular that aids were provided in the from of bustles and bust-improvers for thin women who could not create the “S” shape.

By 1906, the severity of the S-bend gradually straightened out and the waistline rose which prompted women to chose elongated corsets that focused on the thighs and hips and did not cover as much of the breast. Contemporary notions at the time deemed that a figure that was obviously corseted was unattractive; which further contrasted the severe figure of the Victorian Era

Women in the 1900s still held much of the social obligations of the preceding century.  A fashionable woman of notable social standing had several outfit changes throughout the day. One was required to remain fashionable for morning activities, a luncheon, afternoon calling, walking, motoring or boating, riding and then dinner, reception, balls or theatre in the evenings. Each activity required a specific style of dress both for functionality and for fashion.

The second dress features hand done bead work which speaks to the effort that women put into making their dresses. It was common for ladies to add their own intricate beading or other detailing that expressed both femininity and the extensive labor they put into their dress. 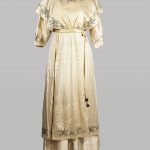 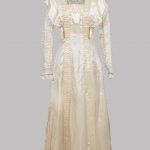