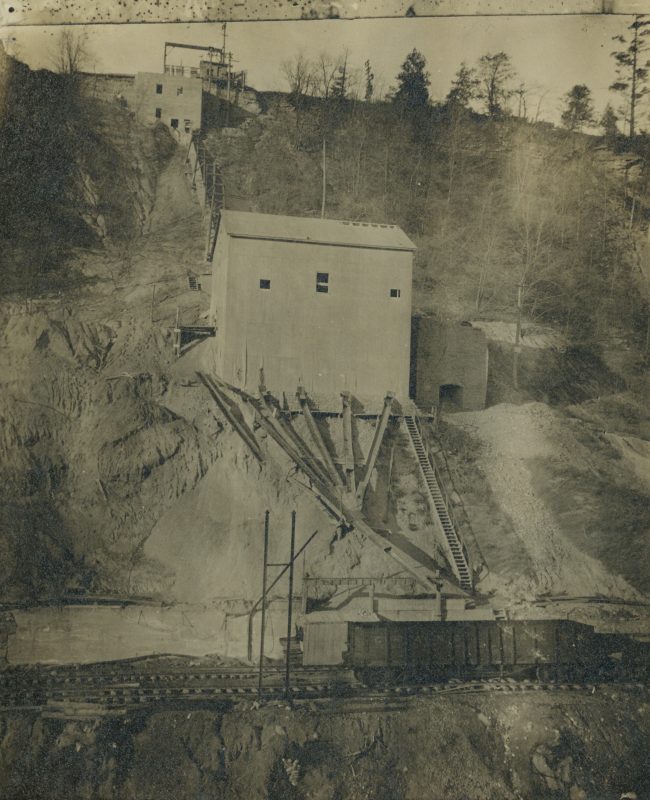 Two peculiar stone structures rest below the Dundas Peak in this watercolour study by local artist Marie H. Holmestead. The buildings are kilns for the production of quick lime, a chemical compound used in the production of mortar and as a flux in iron foundries. They were built by Charles Farquhar in the late 1840s, and the successful business seems to have both supplied local operations while simultaneously shipping out large quantities via the Desjardins Canal. Likely painted around 1890, the scene would already have evoked to its artist the memories of a bygone age slowly fading into the rural countryside.

This clipping of the 1875 Map of Dundas from the Wentworth County Atlas, shows the location of the lime kilns just below the peak and above the tracks of the Great Western Railroad. It was the coming of the railroad which made local lime kilning operations obsolete, as large factories could now produce higher quantities and ship them out by rail. Nonetheless, Farquhar’s kilns seem to have still been in operation at the time that this map was drafted.

After Farquhar’s operations ceased, his quarry and kiln site lay unused until 1905, when it was purchased by American businessman Charles Marshall Doolittle and his cousin Horace Wilcox. The quarry reopened as Doolittle and Wilcox Crushed Stone Company and a large conveyor belt, pictured here, was erected beside the lowly crumbling kilns.

The conveyor has since been demolished, but evidence of the kilns can still be seen today.  Only the bottom few layers of stone now remain, slowly crumbling downward toward the rail tracks below the peak.