Before 1921, Memorial Square was called the Market Square due to the market that used to take place there.  The Square was made up of a selection of buildings including the Fire Hall, the Cowper Block owned by John Cowper, an ornate fountain, and the Canadian Bank of Commerce.  However, it was in 1921 that the name was officially changed to Memorial Square after the unveiling of the Soldiers’ Memorial Monument on December 11, 1921.  Memorial Square was also the scene for many important events for the community.  In 1914, the very first municipal Christmas tree in both Dundas and Canada as a whole was placed in the Square, defining the area as the town’s centre.  A few decades later, beginning in 1936, Memorial Square played host to Decoration Day, which was annual services held in Memorial Square to pay honour to residents of the town who gave their lives in the First World War and the South African War; this typically took place on the 1st of June.  The Memorial Square, even from its creation, was considered to be both the financial and geographic centre of town and became an area known for its commerce, its function as a meeting place for the community, and the main site for honouring and remembering those who were lost in war. 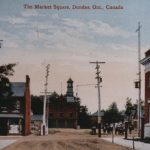